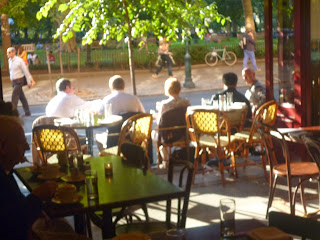 In the long history of the development of Center City there existed idea of pitching it to ABC and SoapNet with Frank Valentini as the Executive Producer. Agnes Nixon's creations, All My Children and One Life to Live were based in a fictional suburban Philadelphia where the inhabitants were often going to Center City, which is what Philadelphians call their downtown area.

The critical success of General Hospital's Nightshift was the inspiration for the idea. In an earlier incarnation Center City was called Between Two Rivers. We decided to draw on the history of the wonderful characters in Pine Valley and Llanview and have them crossover to interact with the Fontana-De Marcos and other core families who live in a fictional Philadelphia.

It's unfortunate that it looks like Agnes Nixon's "stories" will be no more even in their Prospect Park forms. SoapNet, too, will be going away permanently at the end of December. We believe there is a strong, solid market for storytelling with a long story arc. While Center City is not precisely a Soap Opera in the sense of Daytime TV's "stories" it is a serial drama with a long story arc and rich back story. We're convinced there is a place for it and we continue to pitch it where we think appropriate and continue to look for "names" to attach to it. The biggest hurdles seem to be to get the right people to look at the solid pilot script and the unique story behind it.

It could also be something of a mini-series in the vein of NBC's Dracula, i.e. a series extending for ten episodes or so. The Bible is complete in the sense that we know exactly where this story is going.

The center of the action is an Italian restaurant in Rittenhouse Square. A divorced Sicilian American mother of two grown sons struggles with the disappearance of her fraternal twin and co-owner of the restaurant she now runs to keep the family legacy alive.There is a diverse cast of characters depicting the tapestry of the Philadelphia ethnic landscape. In addition to the Italian matriarch, Anna--we had fond hopes to get Annabella Sciorra involved--there is a strong Black matriarch in the person of Marlena Festa.

Our hope is to bring a "name" into the fold, especially in the characters of Anna, Marlena, Nick and Gaetano. We have some exceptional talent attached to some of the other roles. Actors love it: "I just finished Center City and I’m really impressed. Your dialogue is real and witty and often moving– it rolls off an actor's tongue. On a personal level, its so refreshing to a read an authentic story about a piece of my beloved hometown … you have juicy, interesting, three dimensional characters living in a wonderful story. Thank you for sharing this wonderful story with me." ~ actor/playwright Mark Borkowski (Boardwalk Empire) Contact: papag at center-city.net
Posted by Giovanni Vitacolonna at 1:34 PM 0 comments